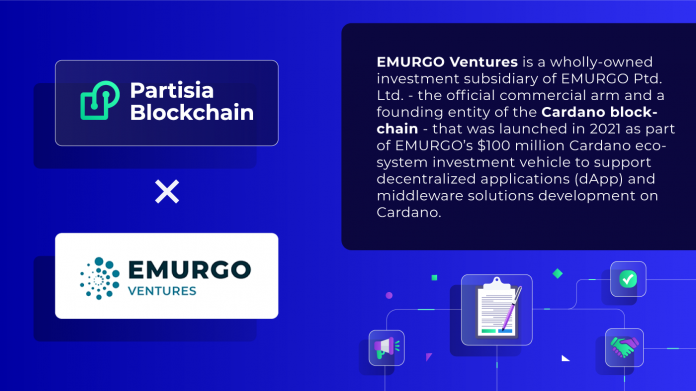 Recently, Partisia Blockchain and EMURGO Ventures, the commercial investment arm of Cardano, announced their partnership. This partnership will give Cardano blockchain developers, and users of decentralized applications, more privacy.

What is Partisia Blockchain?

Partisia Blockchain (MPC) is a Web 3.0 public blockchain designed for trust, transparency, privacy, and speed of execution. The Partisia Blockchain, as a cutting-edge solution to decentralization’s security and privacy concerns, is the first complete integration of blockchain technology with another commercial cryptography, which is called multi-party computation (MPC).

Partnership between Partisia and EMURGO Ventures

The goal of this partnership is to leverage Partisia Blockchain’s privacy preserving zero-knowledge, multi-party computation for Cardano dApps and its users. The development team from Partisia will build customized smart contracts for Cardano developers, which they can utilize when applicable to their use cases. This provides strong privacy for both Cardano developers and their dApp users.

With the first full version of its smart contract programming language for zero knowledge proofs and MPC calculations set to be launched this summer, Partisia is at the front line of the crypto industry’s attempt to bring zero-knowledge proofs into the mainstream.

EMURGO Ventures is a venture capital firm that invests in Cardano blockchain startups and middleware development. With a newly established project like Partisia Blockchain, EMURGO Ventures’ partnership is applying new gear to its growth.

“EMURGO Ventures is excited to partner with Partisia and its stellar team to bring more privacy tools for Cardano developers to utilize and add value to the Cardano ecosystem. Cardano’s Web3 development is advanced by the efforts of Cardano’s dApp developers, and this partnership serves to add more elements to their toolbox to provide services that users will demand, such as privacy features.”

“Partisia Blockchain couldn’t be more thrilled to partner with EMURGO Ventures to deliver our first cross-chain, zero-knowledge privacy smart contracts to the Cardano ecosystem. The Cardano ecosystem is one of the biggest in the industry, and we look forward to providing as much value as possible to the developers. We built Partisia Blockchain with a collaborative approach to make our privacy contracts available across all other networks, and this partnership is a strong indication that we’re finding product market fit in this industry and that privacy is in demand.”